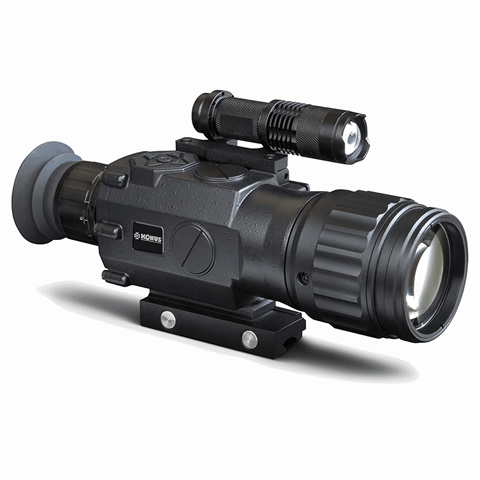 The Konuspro-NV 3-8x50 Night Vision Rifle Scope with Weaver Mount is a rifle scope for night and day, which has a shock resistance of 3500 Joules. Unique to the Konuspro-NV is that you can use three viewing modes: night vision green, black&white and full color. The unit has a 3 to 8x zoom and is equipped with a 50mm lens. It's also equipped with a built-in photo and video recorder and comes with a weaver/picatinny mount and accessory set.

Contrary to other night vision rifle scopes on the market, the Konuspro-NV is equipped with different display modes for specific applications. The Black & White mode ensures a high contrast and makes it easy to distinguish objects from each other. The navy-green image, on the other hand, provides a true-to-life image, as for the regular residual light amplifiers. Additionally, a full-color mode is integrated for daytime use, allowing you to easily track your targets without over-exposing the displayed image.

The large 50mm lens ensures that a clear image is created even in dark conditions. However, there may not be any residual light. In that case, you can use the infrared illuminator which is located on the body. It has an 850nm wavelength, which results in a larger range compared to a 940nm IR beam. For aiming and tracking your targets, the night sight uses a 30/30 reticle. The Konuspro-NV comes standard with a Weaver/Picatinny mount, with which you can easily mount it on your weapon. Mounting should be mounted on the rail between 1,469 and 1,808 N/m.
If your weapon has a different connection, you can unscrew the mounting and remove it from the night vision rifle scope.

During use, you have the possibility to take photos and videos, which are stored on the already installed 8GB microSD card. Recorded pictures can be transferred to a computer or laptop as well as to a TV via the included video output cable. You can also view your recordings on the night scope itself. The rifle scope is powered by a 18650 battery; the infrared ray is powered by a 14500 battery. Both batteries are included in a rechargeable version, which also includes a universal battery charger with USB cable and AC adapter (EU type).

The rifle scope is an ideal tool for hunters shooting at short or medium distances. The device is specially designed for hunting in the twilight and complete darkness, but also just during the day. For use during the day, it's equipped with a full-color mode.